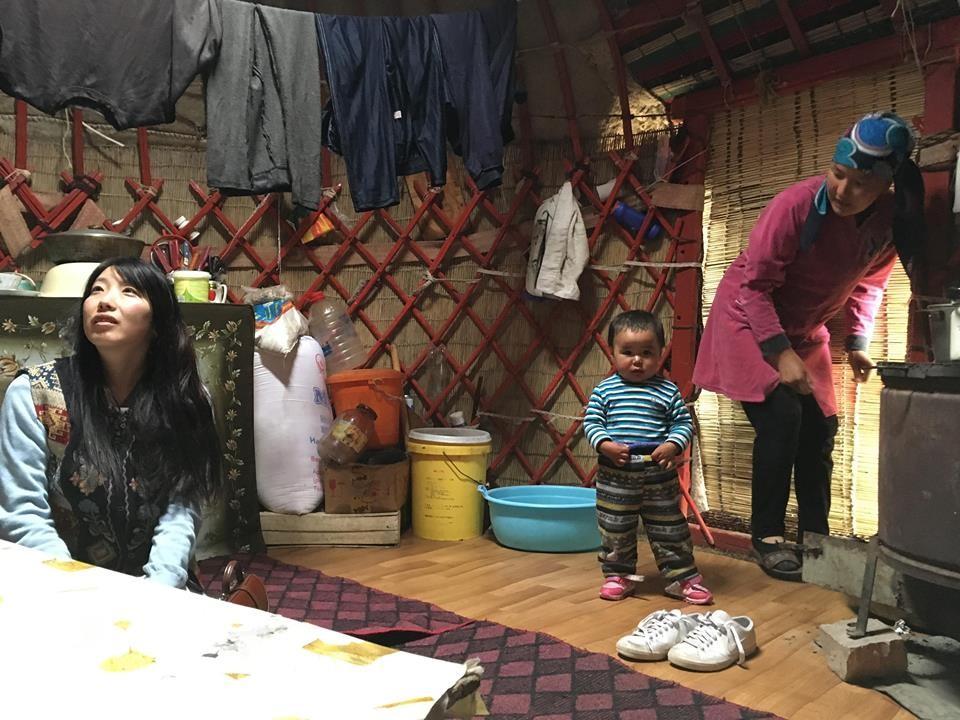 In early May, many parts of Kygyz mountains are still frozen. The grassland beneath the mountains just start to get dry enough to set up the yurt camping. On my way to Kel Suu lake, I came across several family moving their yurts from the village to the mountain. Normally they go back to the shepherd life from early May to end September.

Now it’s still too early to see the dotted yurts everywhere on the grass, but I was lucky enough to meet some families on moving already. All the yurt components can be fit in the truck. I find it so interesting Of course they are bringing their horse and sheeps to the mountain. making a fire, to cook Got invited for some tea.

Inside the Kyrgyz shepherds' wool-felt Yurt

When I decided to travel around Central Asia, my big dream was to stay in one of the yurt on the endless grassland. The fact is that I just came a bit too early in May. Unlike the whole-year-round dotted yurts in Mongolia, here in Kyrgyzstan and Kazakhstan, only the summer months seem popular for shepherds to set up their yurt in the mountain as their summer stay. For the rest of the year, they stay in the nearby village or a normal house if staying the whole year in the mountain.

In Karakol, I was staying in one of the touristic yurt camping lodges in town. But compared to that yurt in Karakol, the yurt from the shepherd family that we came across in the south of Kyrgyzstan, near the Chinese border, was much more interesting and more atmospheric to me.

May was still too early for yurts, but I did find some and was able to take a look inside.

The yurt is a size for a small family of 4, probably you can see, it isn't big at all, even for two it seems a bit crowded.

The surface of the yurt is made of 2 cm-ish thick wool felt. The wool keeps it cool in the summer. After feeling it, my dream becomes owning a yurt one day. I already asked, there are some companies exporting them to Europe.

Does the yurt top look familiar? Both the Kyrgyz flag and Kazakh national symbol have this shape.

Normally the space is divided into 4, the right side is for women to store their stuff, and the left side for the men. The middle is to place the table during the day, and serves as beds at night. Close to the entrance there's a small kitchen. A small yurt like this can actually host many people, during the summer days, when families of the shepherd come visit them, they can all sleep on the ground of the yurt.

Man's stuff, if look carefully, you might notice the portable TV, it's so small because the whole house was supported by a big transportable battery, charged with solar energy.

This side is for women to store their stuff. I think I might have too much things if I have to stay in such yurt :p

The stove, it can function as cooker or as heater if necessary.