Switzerland is world famous for its stunning nature. Andi told me and Li that Oeschinensee is regarded as probably the most beautiful lake among thousands of other mountain ones, Switzerland, which totally made me want to visit it. Oeschinensee is located 1578 meters above sea level. The lake is normally frozen during five months per year, from December to May. I heard it is stunning all seasons.

To get to Oeschinensee, the closest train station is Kadersteg. We had to switch the train twice from Thalwil. It was totally different direct as to the Pontresina Valley and the Morteratsch Glacier other day. The journey took in total around 4 hours. You can do a day trip from Zurich area. Although it seems too long on the way, time went fast when Li and I talked the whole train ride. 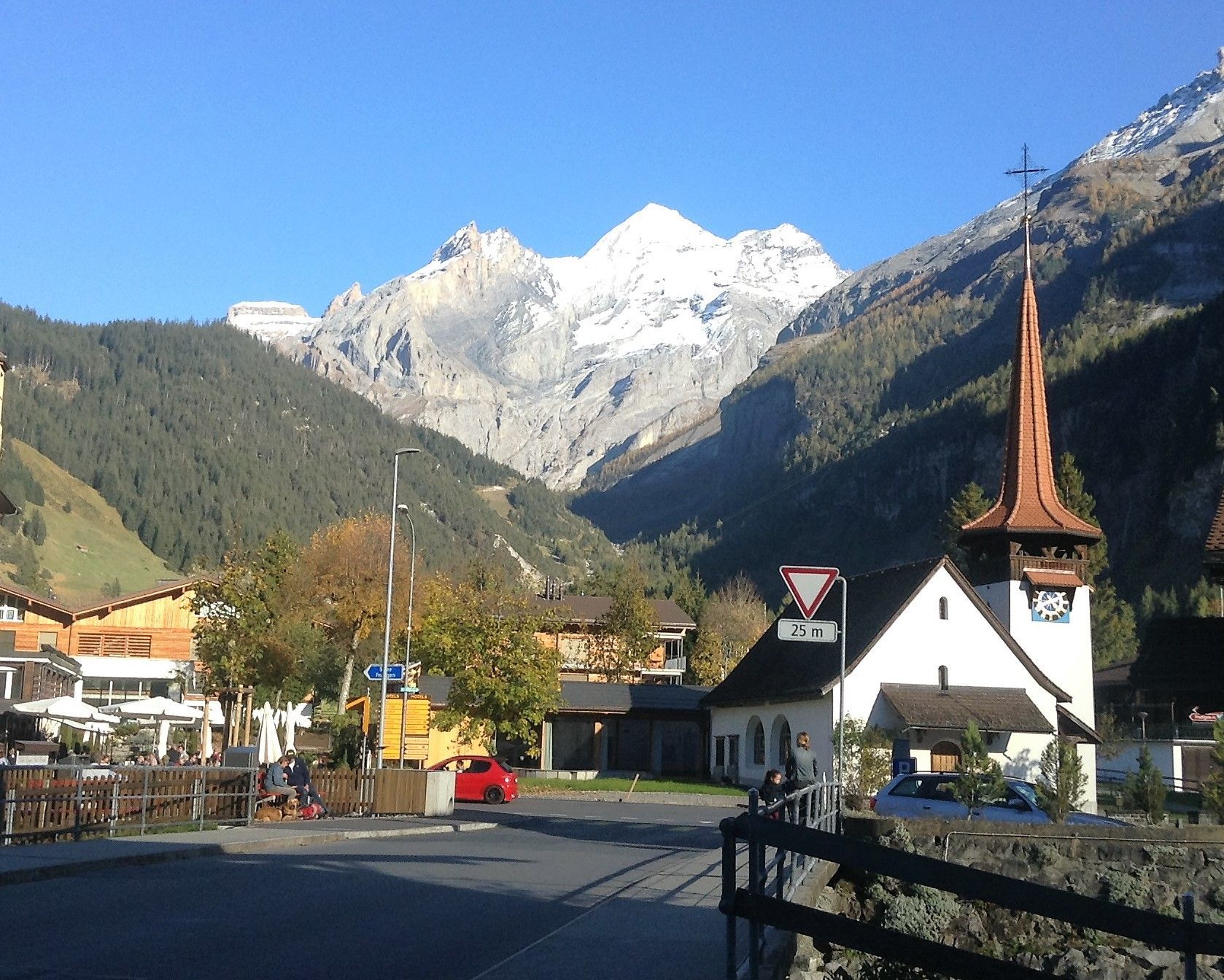 I was so lucky to have a clear and sunny day. 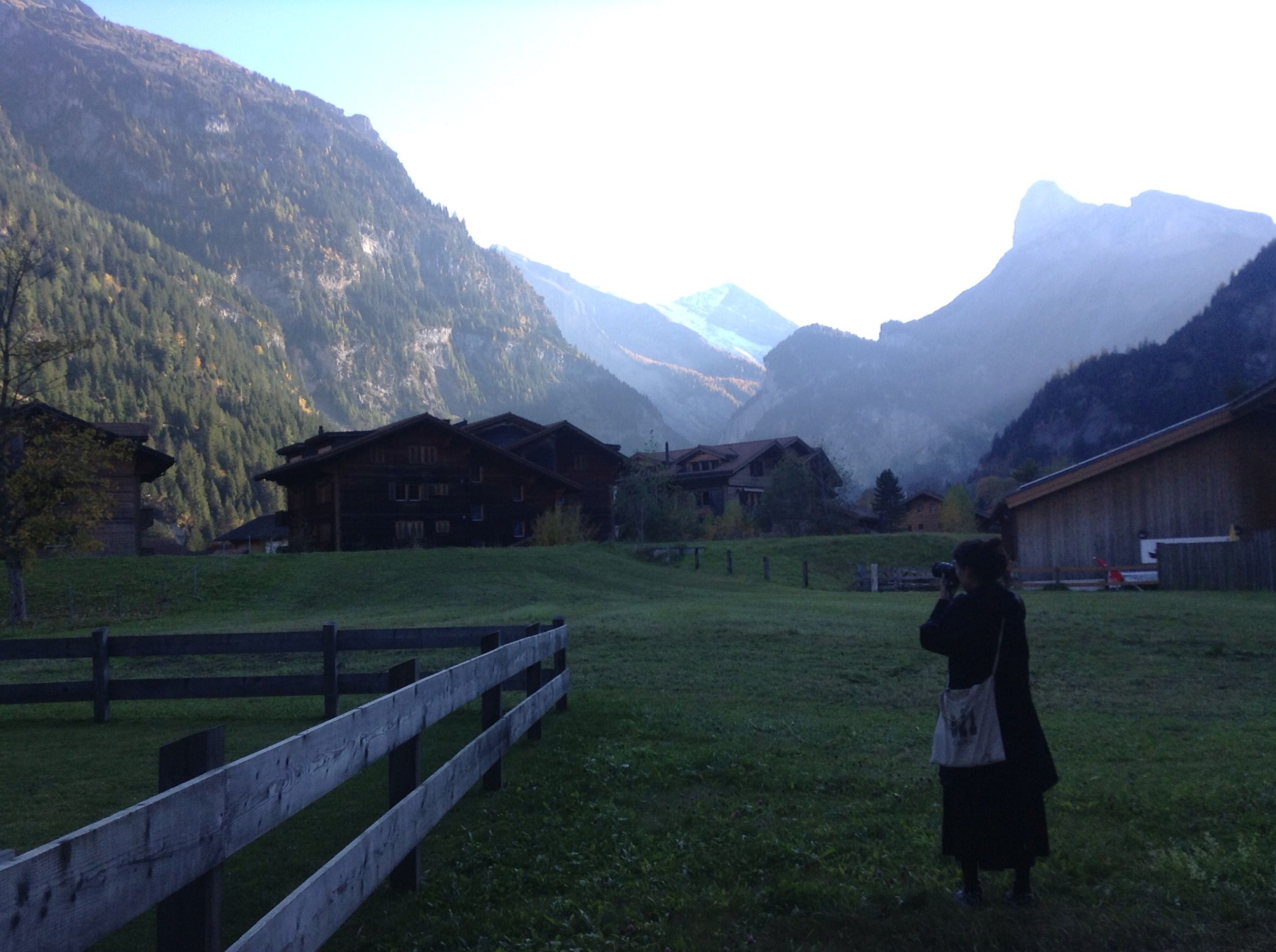 Traditional wooden houses in the area. There are different trekking routes. The blue part shown in the map is the Oeschinensee. 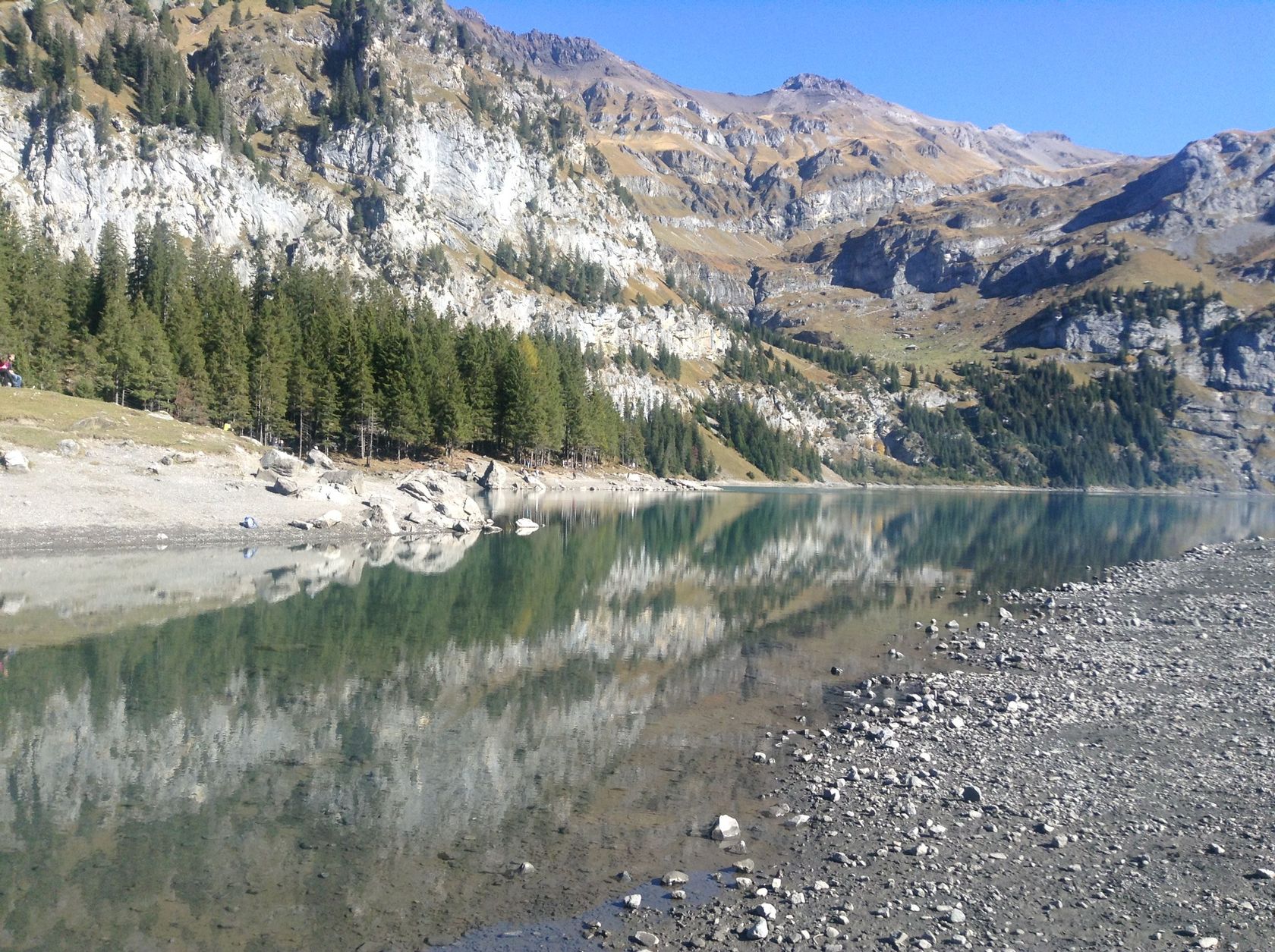 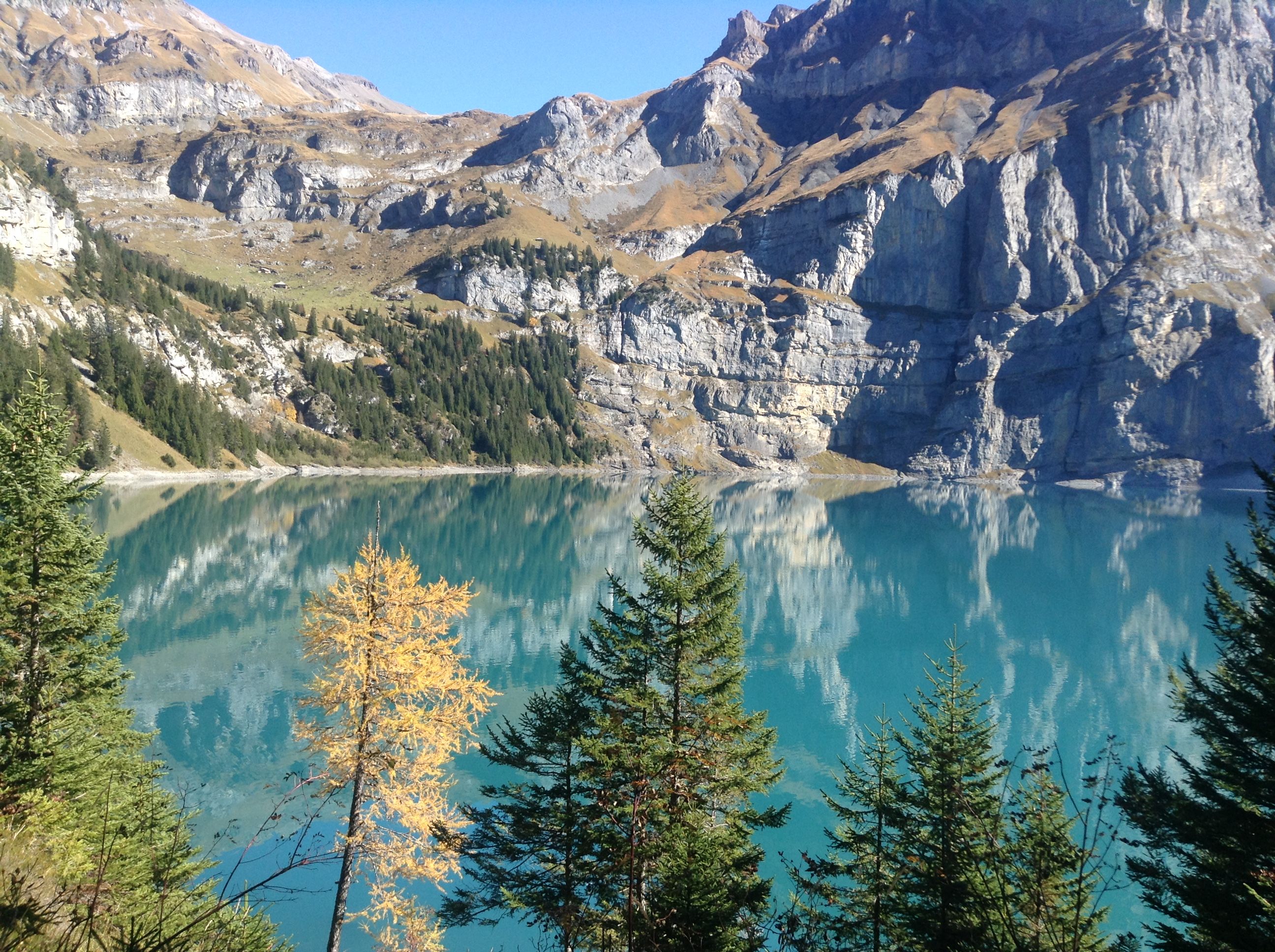 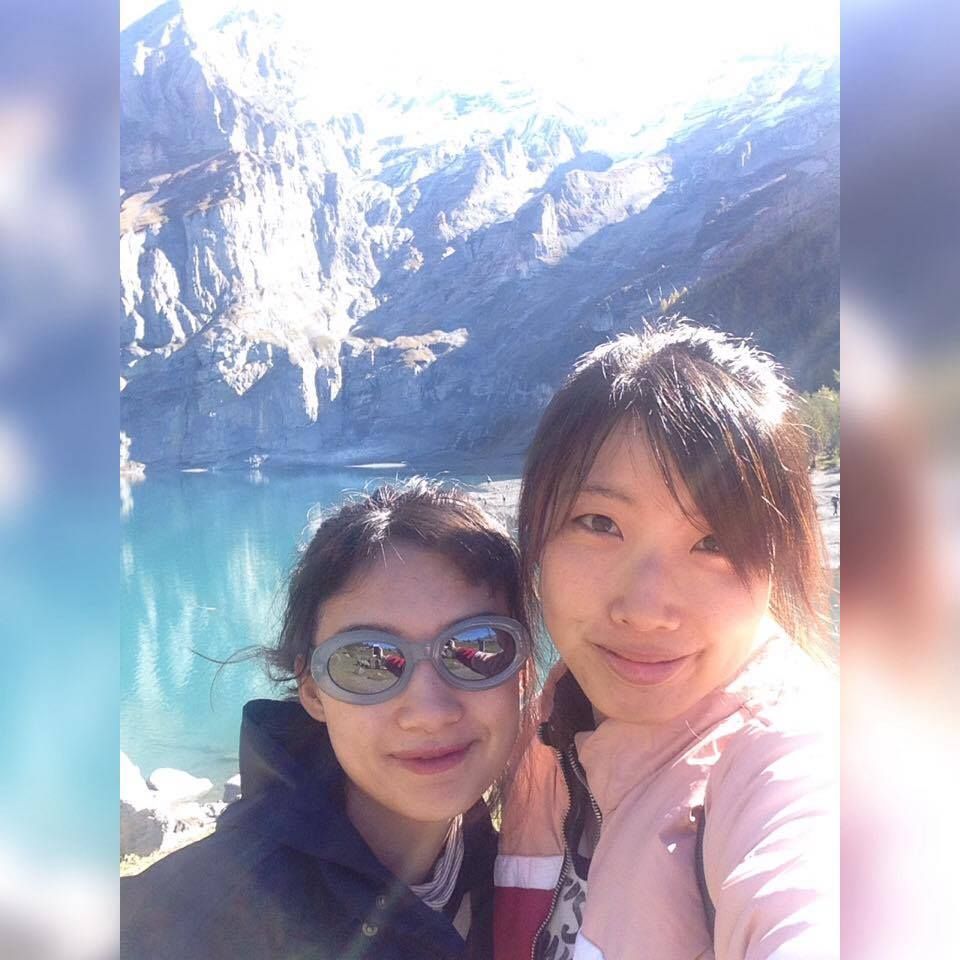 Oeschinensee has an unusual turquoises color. I think it resembles the famous Banff national park in Canada. It also reminds me of the alpine Tuni lake I went in Bolivia. But Andi said Bolivia is still better, "without the Disneyland" in his words. 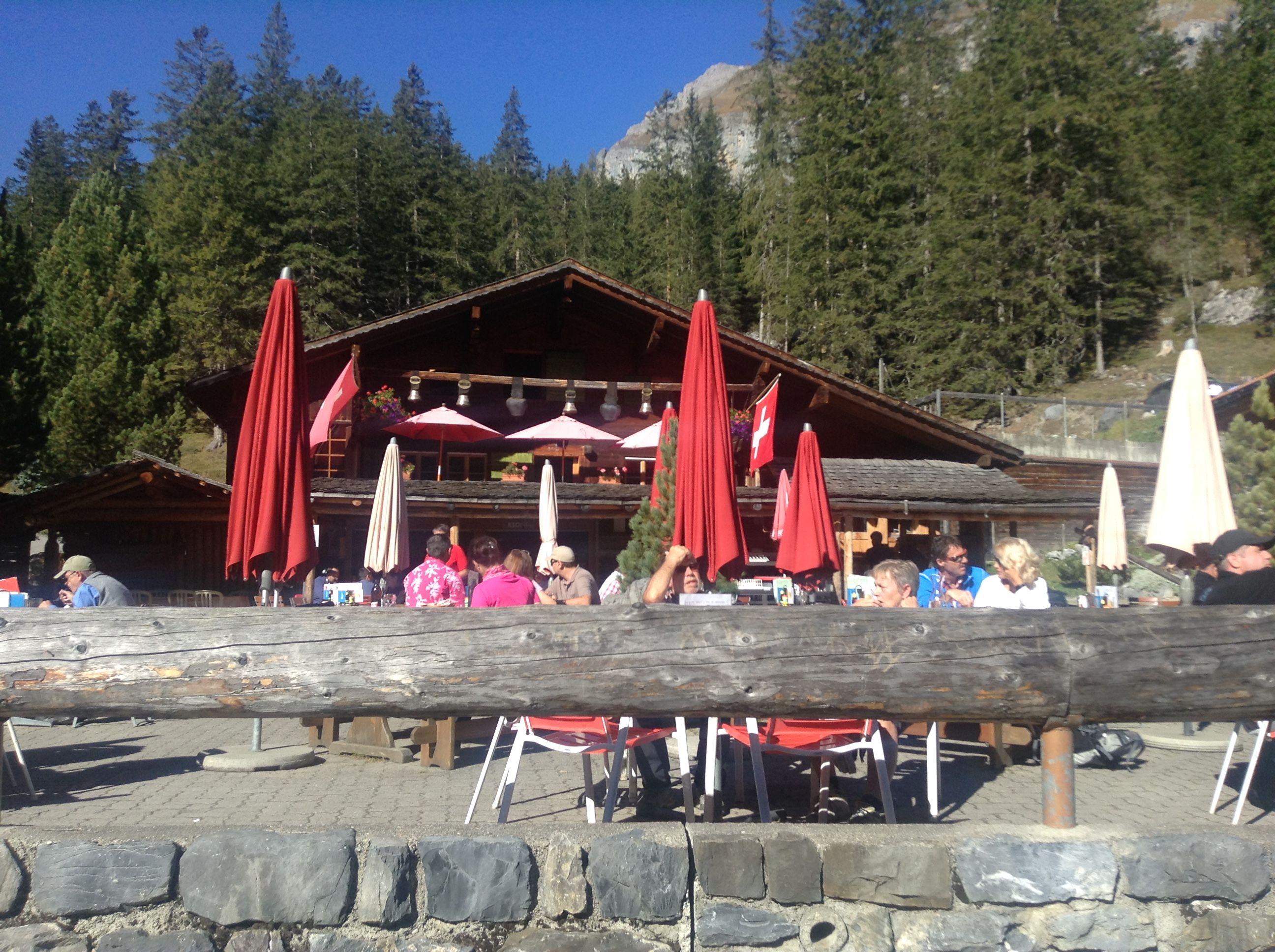 The "Disneyland" he meant. When we went there during the school autumn holiday, there were so many tourists, most of them with young children. Switzerland is a super kids friendly country where you find even special train for kids. Although Oeschinensee has an other-worldly looking, many kids were playing like in the playground. 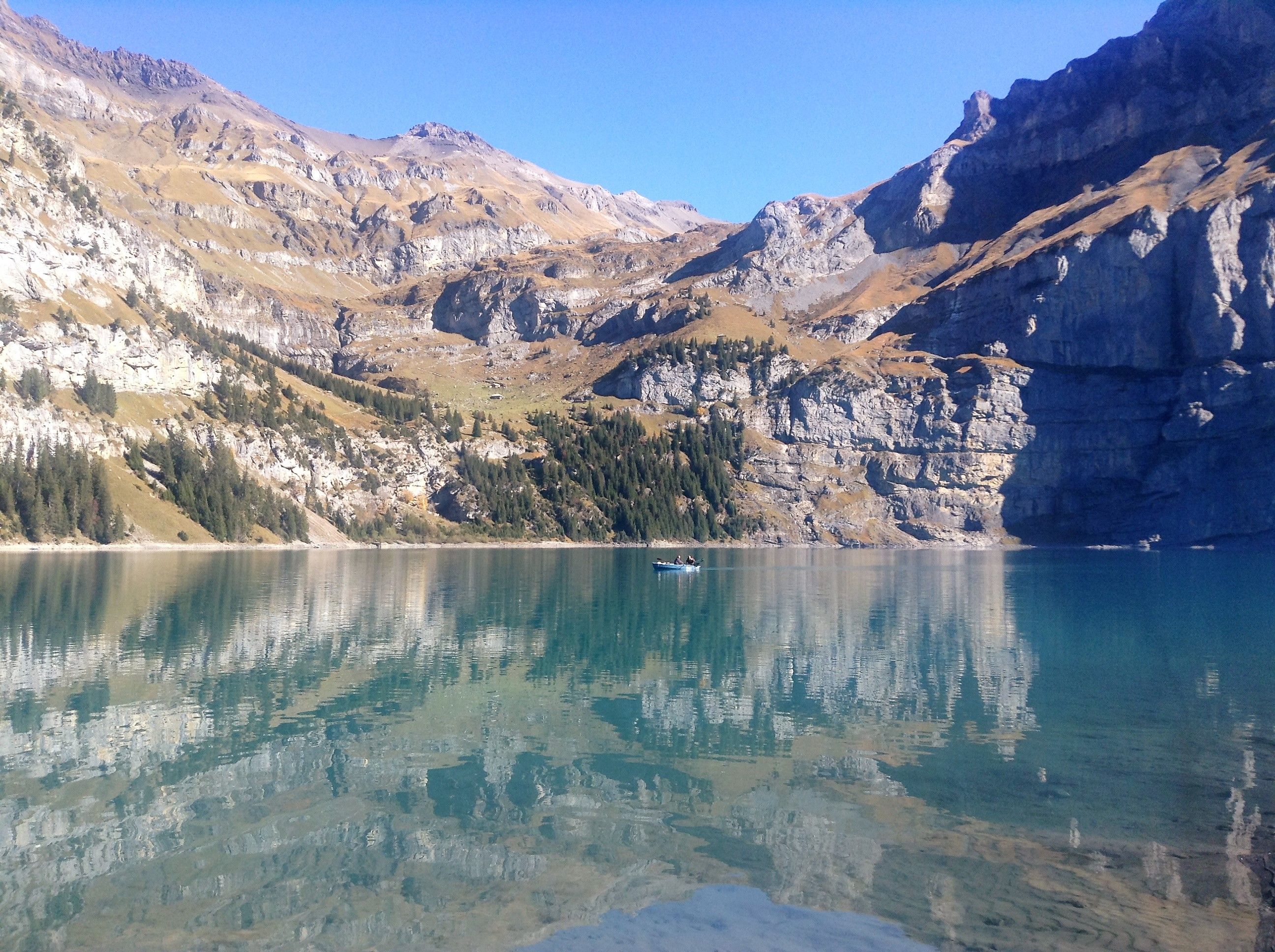 I saw there were row boaters or kayaks on the lake. If you have more time there, give it a try. It seems great fun to me. 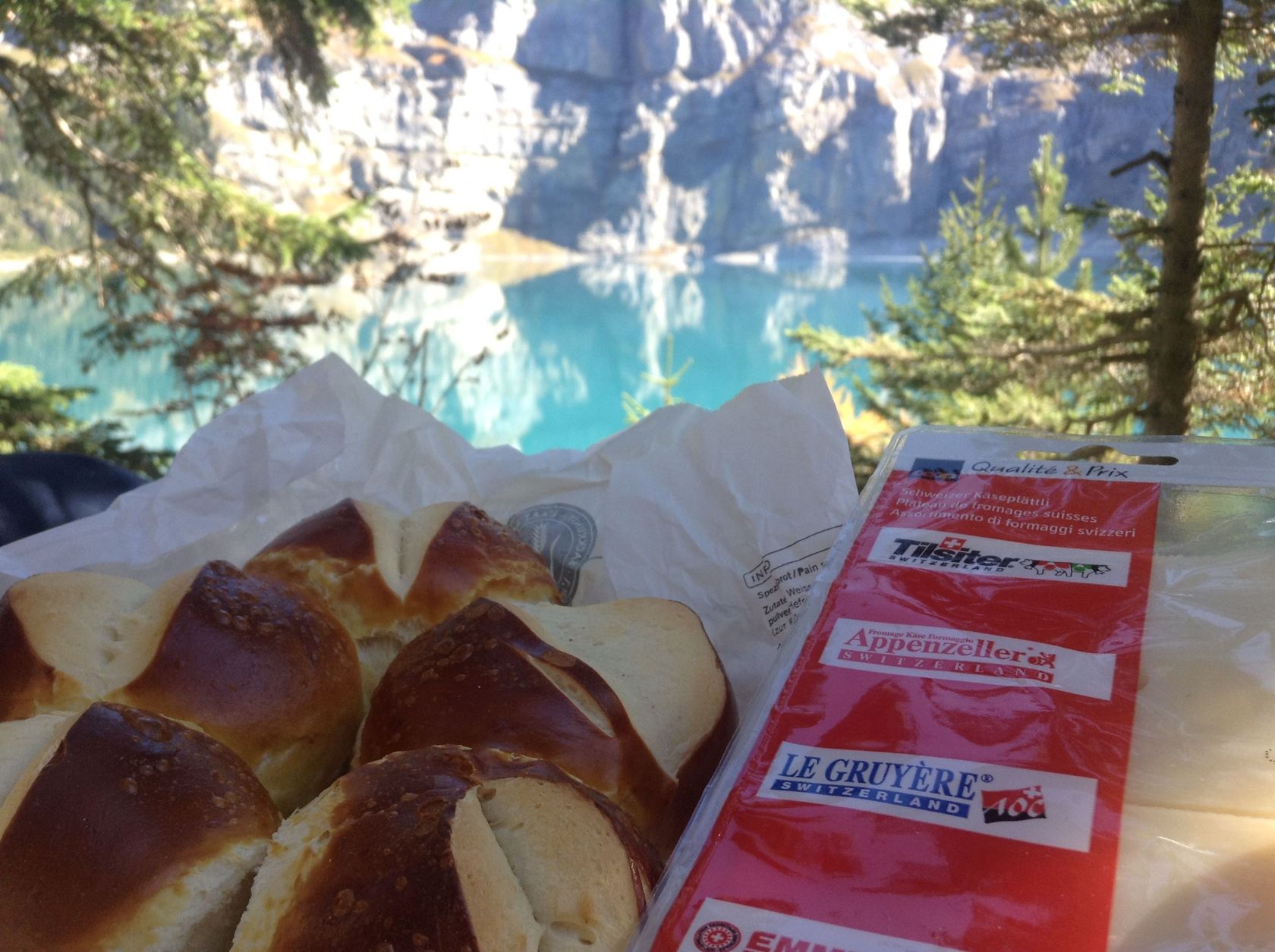 Picnic with such a view. We bought some Swiss cheese and bread in a supermarket close to Kadersteg train station. Being low lactose intolerant, I barely eat any cheese but every time I come to Switzerland, couldn't help trying out their cheese. In my opinion they have the best cheese with a big variety among which I can always find the one I like. 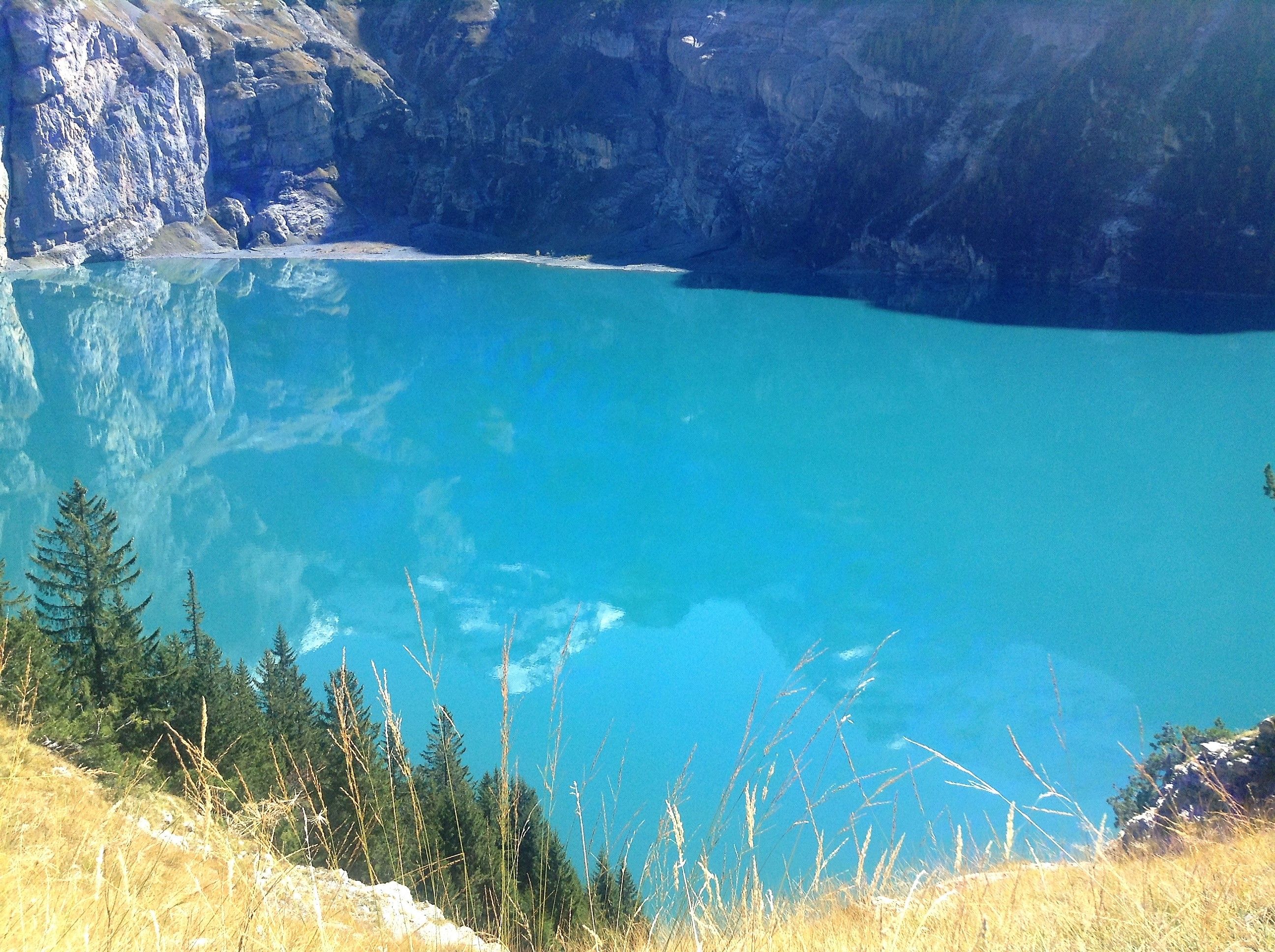 The weather was s great that you can see the reflection of snowy mountains on the lake. 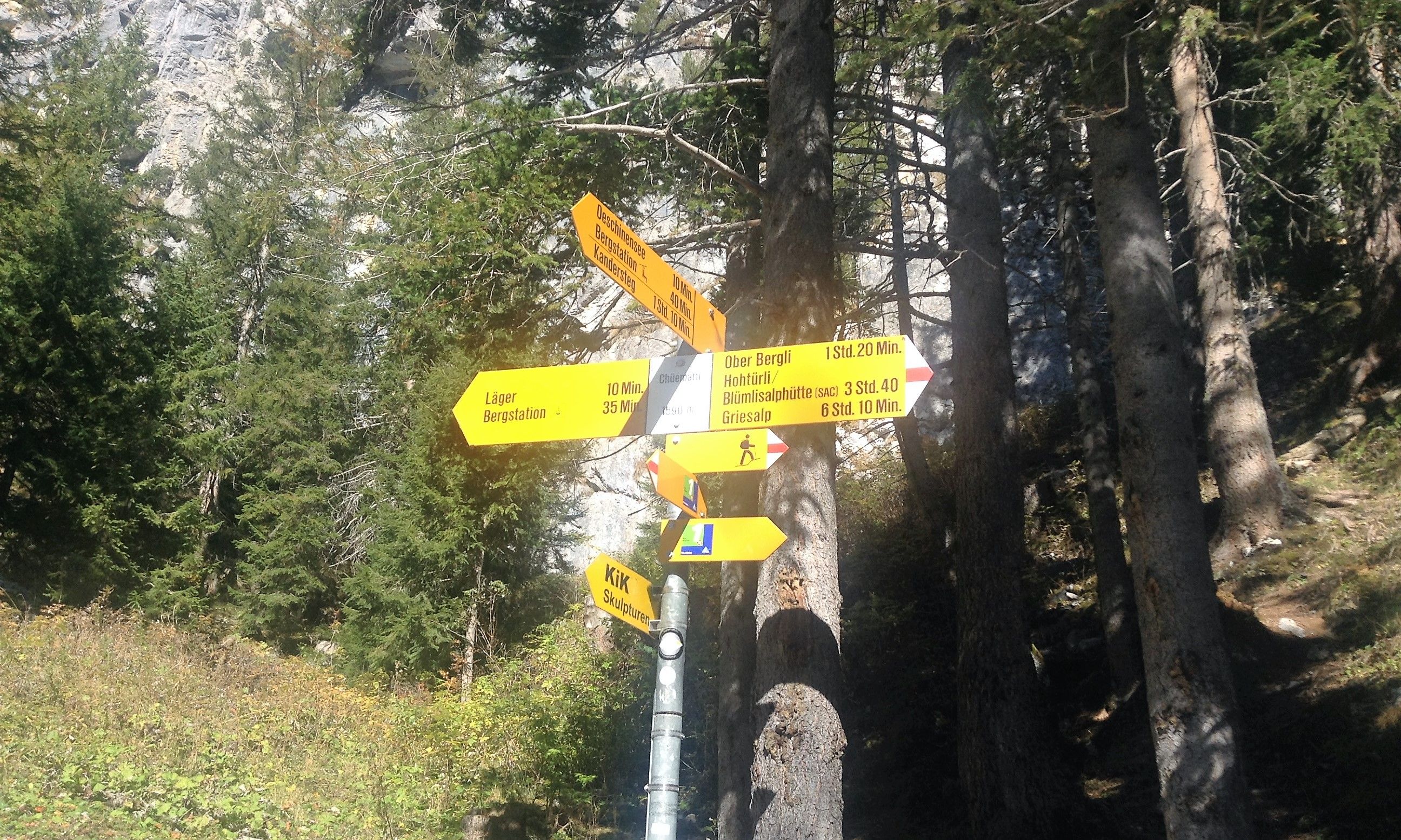 there are several hiking trails from the lake. It was not until I saw this sign that I realized last time I went trekking in the Griesalp in the area. I used to be a traveler without the basic conscious of any geography knowledge. That's why now I made a map animation above. 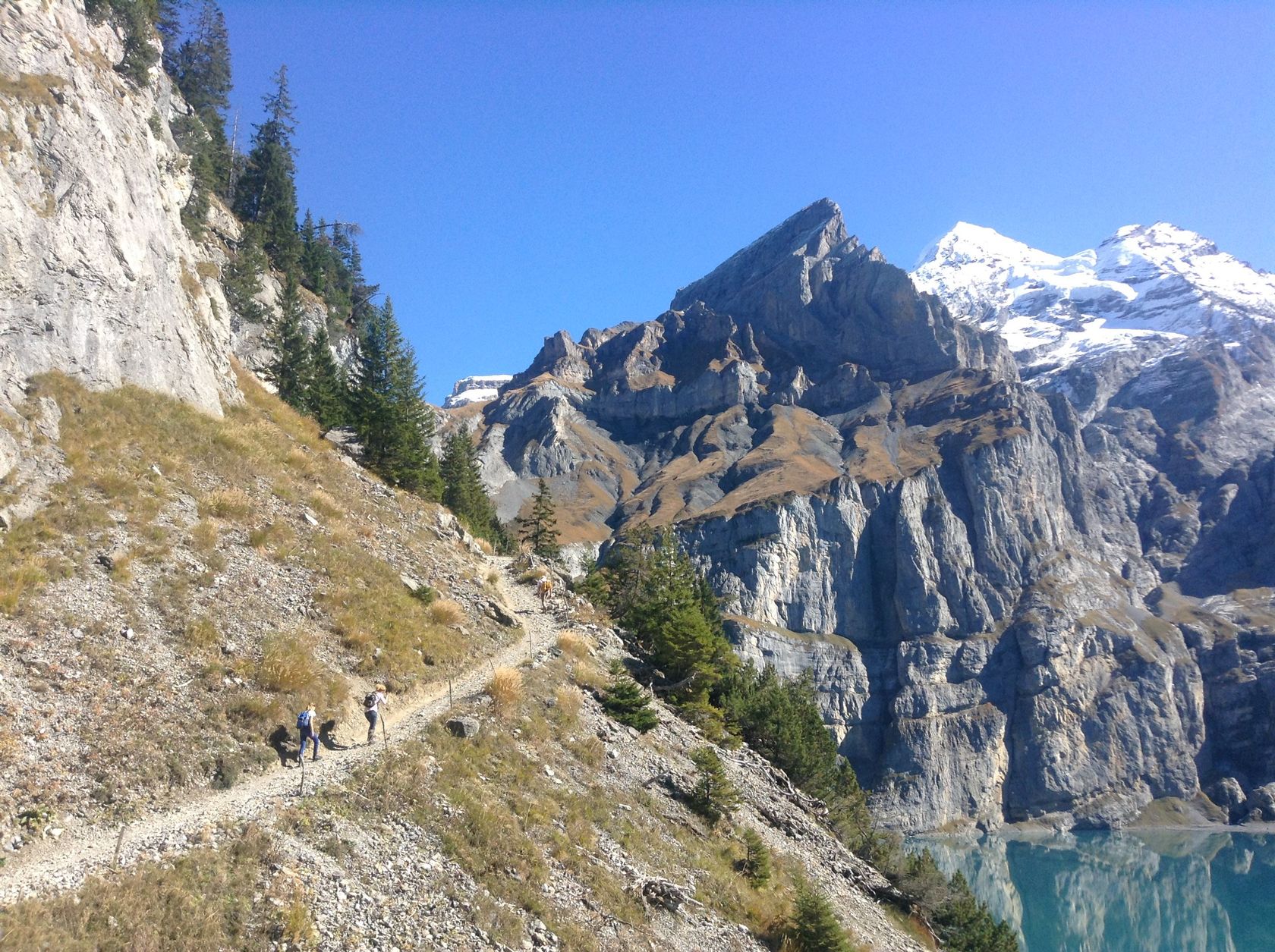 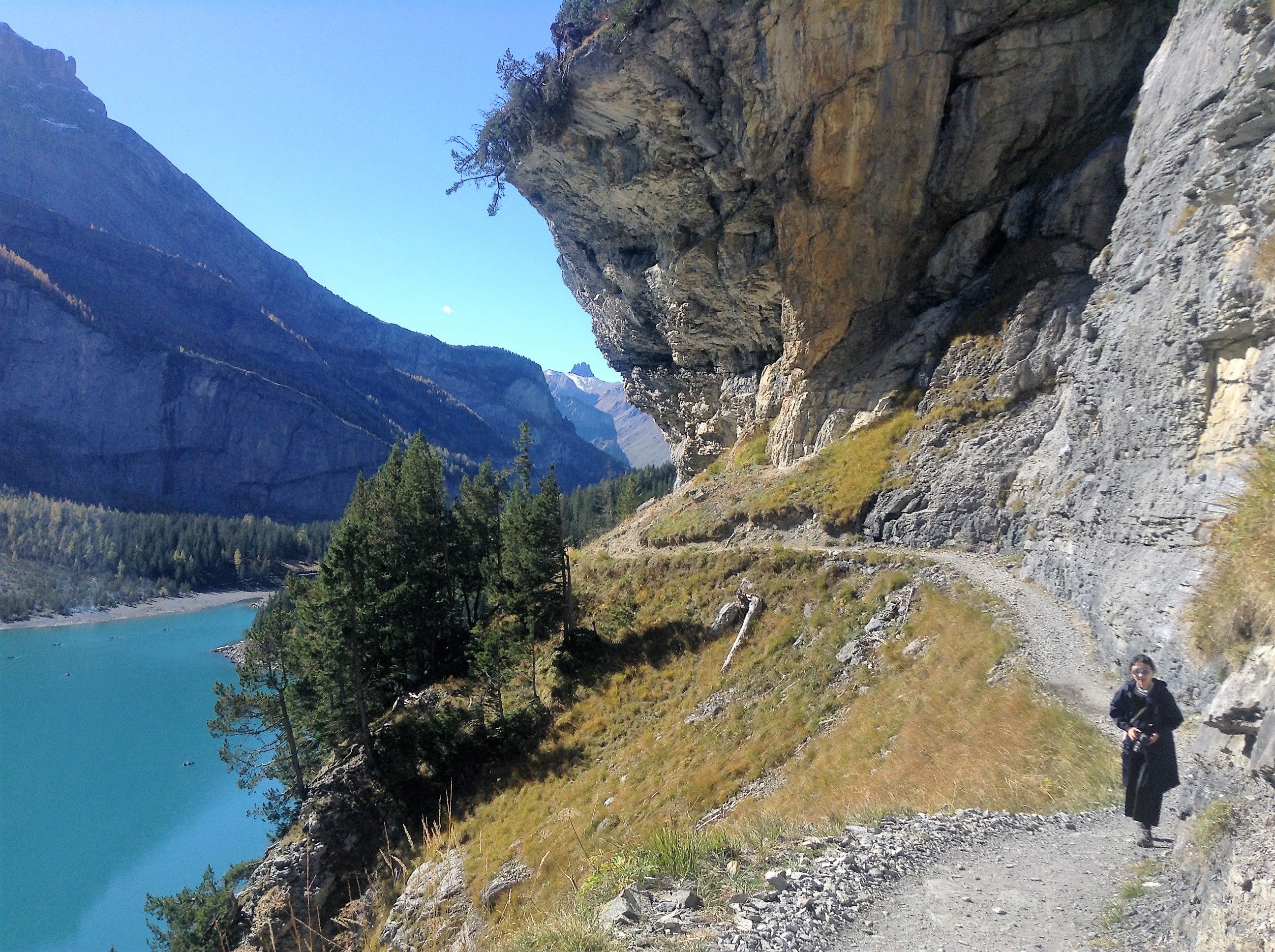 There were numerous breathtaking views along the way and some parts of the way look dangerous. We hiked around Oeschinensee. When trekking further, the nature became wilder and wilder. We enjoyed the panorama view of the lake, the mountain and the glaciers. Every random shot seems like a postcard, me and Li couldn't stop taking pictures everywhere. If you plan to stay overnight, I guess it would be a great idea to do the big circuit all the way to the mountain.

Last but not least, I took a video by the lake, thinking it was funny. 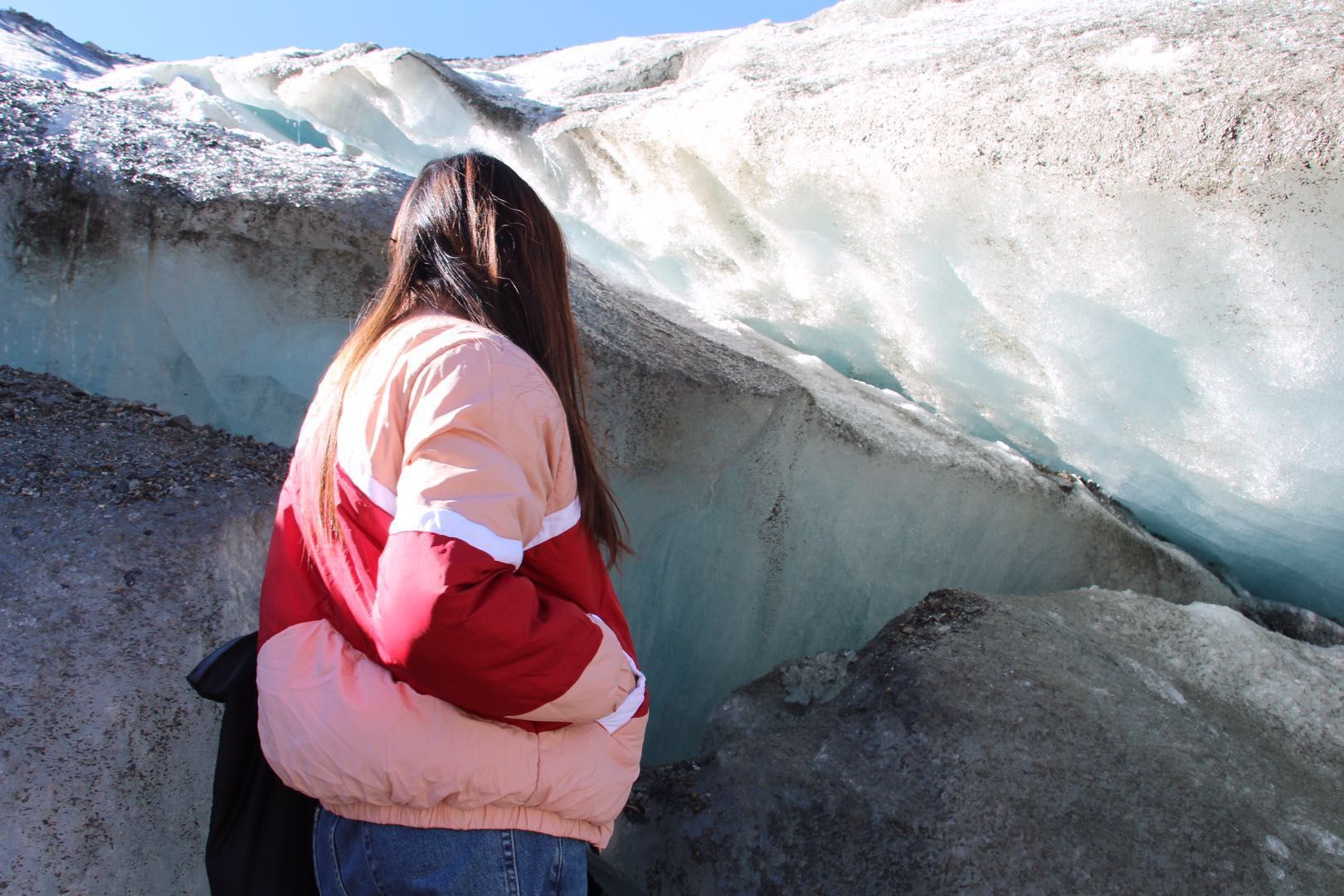